Pentaho is a suite of open source Business Intelligence (BI) products which provide data integration, OLAP services, reporting, dashboarding, data mining and ETL capabilities. The Pentaho suite consists of two offerings, an enterprise and community edition. Pentaho’s core offering is frequently enhanced by add-on products, usually in the form of plug-ins, from the company itself and also the broader community of users and enthusiasts.
You can learn more about Pentaho at http://www.pentaho.com/

Pragmatic Pentaho BI is a pre-configured, secured, optimized and ready to run image for running Pentaho BI on Amazon EC2 in a production mode. Pentaho BI is a very popular Business Intelligence Platform of the Pentaho Suite of applications. Commonly referred to as the BI Platform, and recently renamed Business Analytics Platform (BA Platform), makes up the core software piece that hosts content created both in the server itself through plug-ins or files published to the server from the desktop applications. It includes features for managing security, running reports, displaying dashboards, report bursting, scripted business rules, OLAP analysis and scheduling out of the box.
Commercial plug-ins from Pentaho expand out-of-the-box features. A few open-source plug-in projects also expand capabilities of the server. The Pentaho BA Platform runs in the Apache Java Application Server. It can be embedded into other Java Application Servers. 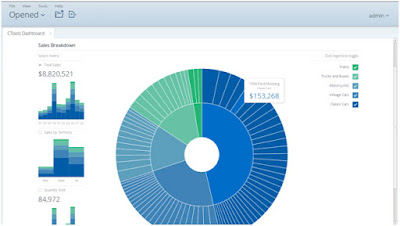 With 5.3 comes a new set of APIs to provide more control over Analyzer when working in an embedded fashion. These APIs allow for more fine-grained interaction with the Analyzer reports and data. The Analyzer extensibility APIs will live in a single place, and include introductory material, as well as samples.

Pentaho has three categories of multi-tenancy that is achieved with 5.3

Pentaho 5.3 has updated the Streamlined Data Refinery to improve the modeling process, added security and data source improvements, and added support for Amazon Redshift and Cloudera Impala.
Features of interest

Other updates with Pentaho 5.3

Here we cover changes to the software that might impact your upgrade or migration experience. If you are migrating from an earlier version than 5.2, these pointers would be of great help!
Manually Migrating Big Data Cluster Configurations Stored in Hadoop Steps and Entries
If you are migrating or upgrading to PDI 5.3 or greater, and you have transformations or jobs that use the following Big Data steps or entries, you might need to convert the existing cluster configuration information to use the Hadoop Clusters feature.

System-wide Row Limit
Pentaho 5.3 comes incorporated with the capability to set a system-wide row limit for Pentaho Interactive Reports (PIR). Users will not be able to override this row-limit once you have set it, although they will have the option of setting their own, smaller, row-limit through the query settings. This will improve performance when the returned data set is fairly large, and also adds the ability to run the full report in the background.

Show Repository Buttons Feature
Extended PIR so that you can show the buttons that interact with the repository in the PIR toolbar. This will allow you to embed PIR without having to use a third-party tool to hook the callbacks on. This function is triggered by passing a parameter on the URL of the PIR plugin.

Query-Metadata Collection
The changed PIR to take advantage of the query metadata collection improvements for Report Designer in Pentaho 5.2. This query metadata feature will improve the design time of Interactive reports.

Drop in your Details and You’ll get a brochure on

“Best Practices to Confidently Run a Virtual Team with Odoo”